Due to necessary scheduled maintenance, the JMIR Publications website will be unavailable from Wednesday, July 01, 2020 at 8:00 PM to 10:00 PM EST. We apologize in advance for any inconvenience this may cause you.

Who will be affected?

Back to Announcements Index

The 2016 impact factor of a journal can be calculated as follows (Wikipedia): 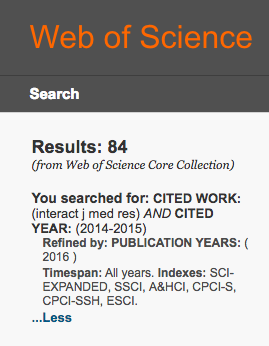 Disclaimer: Calculations are our own and are not provided or endorsed by Clarivate Analytics, the owner of Web of Science and the Journal Citation Reports.